By Tommy Clarkson from the October 2017 Edition

Until recently, I thought ours was simply a Livistona rotundifo-lia. But my pal, Anders Lindstrom, of Nong Nooch Gardens near Pattaya in Thailand, patiently explained it to me thusly: “At the lower level taxonomical system is Genus and then species, but if someone sees additional differences [not distinct enough to separate it into a new species] however, nevertheless, distinct, then they can separate it into a subspecies. In Livistona [genus] rotundifolia [species] luzonensis [subspecies] the luzonensis is separated by several characteristics. The red [or purplish] trunk is one of them. Another is the fact that this subspecies only comes from the island of Luzon in the Philippines. All wild rotundifolia, coming from the rest of Southeast Asia, are not of this subspecies but, otherwise, conform to the normal rotundifolia characteristics.”

He continued, “This lower level subspecies business is some-times looked at as “bad” taxonomy and some researchers agree that it is part of the variation within a living organism. Others think that, if there is a distinct, differing characteristic, that we should separate it as a new species. That happened in this case and someone described this luzonensis as a new and distinct species of Livistona robinsoniana. But, that’s the “old school” procedure, with botanists looking at morphological differences on the living plant. However, now with modern technology, we can compare the genes of these different subspecies or species. In this case, they decided that the genes are not distinct enough to separate it to a new species, treating it as a variation of genes within a single species – rotundifolia. As the rule of taxonomical nomenclature dictates that the oldest [first described] name must be used, this means that robinsoniana and luzonensis will have to be synonyms of the oldest name which is rotundifolia.” 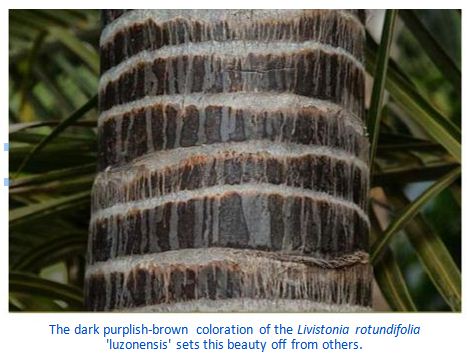 Livistona rotundifolia requires ample moisture and semi-shade when young, but is quite happy in full sun when mature. Ours thrives in fertile, well-draining soil and is fertilized every six months. Although originally from the tropics, it does well in sub -tropical environs and warm temperate areas. 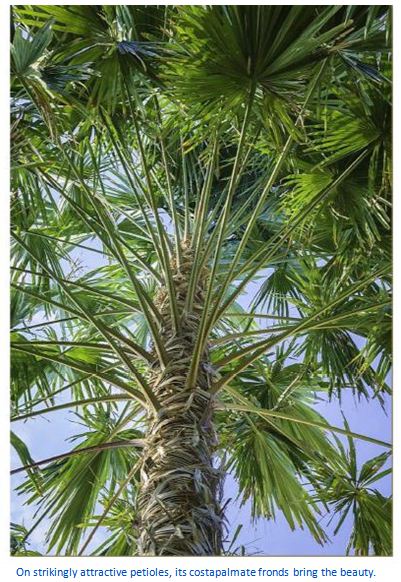 Its trunk may reach nearly one hundred and fifty feet (45.72 meters) tall and around six to ten inches (15.24 – 25.40 cm) in diameter. Its leaf scars range from obscure to prominent. The stubs of the formerly arching fronds are not persistent. It has twenty to fifty palmate leaves. Like its flowers, its ripe fruit are yellowish and, if you’re endeavoring to grow them from seeds, they’ll germinate within two to three months.

The Livistona genus is comprised of somewhere around twenty-eight to thirty-four species (depending upon which “authority” one believes and excluding localized hybrids/cultivars such as this palm). They are – to quote Riffle, “mostly large, palmate-leaved, bi-sexual or functionally dioecious [having male and female reproductive organs on separate plants] palms that are widespread in the Old World Tropics and subtropics.”

Like the Anahaw Palm, all members of the Livistona genus are, by nature, solitary trunked. However, we might, occasionally, find one with stems that have branched as a result of an injury. The preponderance of the Livistonas are large to downright massive! One of the ways to help identify them is through their costapalmate (fan shaped palm leaf, with a shortened or ex-tended mid rib) leaf segments. These are rigid when the palm is young, but pendulous when the palm is more mature.

Another constant unique characteristic to this genus is the lingual (a flap of fiber from the leaf sheath that will go away as the frond matures). Either clasping the trunk or free from it, these are wholly different in color, shape, size and texture for each species. And, lastly, all of these different species of Livistona sport a rather distinct hastula (an organ found on only palmate species of palms) at the top of the juncture of the petiole (the frond stalk, primarily between the trunk and the leaf portion) and blade (the expanded part of the leaf).

Now you know more about the Anahaw Palm than many botanists, gardeners and that crotchety character down the street with the weedy lawn.