By Tommy Clarkson from the June 2017 Edition 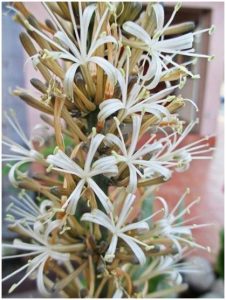 The evergreen perennial succulents of the Sansevierias come in several forms and are capable of surviving for generations. Many call them Snake Plants or Mother-in Law’s Tongue. They are hardy, equally out of doors  where they make excellent ac- cent plants or massed in planters – or inside where they function as cleaners, removing harmful pollutants.

Very importantly to some, none of your digits thumb foremost need to be green to grow any of the plants of the Sanseviera family. In fact, the African Spear virtually thrives on neglect! 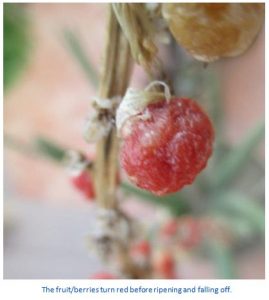 The Sansevieria cylindrica has striped, (very) firm, round as opposed to strap-like -leaves that are smooth and a green-gray color with a striped pattern or, in some cases, just dark green color. Each pointed, tipped leaf is about 1 inch (3 cm) thick and may grow  to a  height between 3 feet (1  meter) to 7  feet    (2 meters). From a basal rosette, these stiff, erect leaves grow fan-shaped. The many, fragrant, clustered, 1 inch (3 cm) greenish white, tinged with pink, tubular flowers, rise on a long, straight stalk from the base of the spears. Sometimes, these flowers may be followed by spherical orange-red berries of about .4 inch (1 cm) in diameter.

Not requiring the deductive powers of Sherlock Holmes, you have probably already discerned it is from Africa Angola, in specific. It was first described in 1837 by Wenceslas Bojer and received its name from a competition conducted by a Dutch national newspaper. Though the African Spear is reasonably  new to the United States, folks in the United Kingdom and Australia have been growing them for some time and, in all candor, I have no idea how long they’ve been enjoyed here in Mexico but I’ve not seen many!

There are a few variants to the basic species of Sansevieria cylindrica but all very hardy. While some 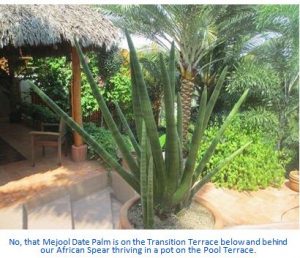 growers have experimented with braiding or shaping the basic plant, I’d encourage that they be left to their natural fan-shaped attractiveness.

Have we emphasized “hardy” enough? One writer called the African Spear the ultimate “bullet-proof plant”, as it is exception- ally survivable. It can put up with high light, deep shade and  the various hues in between this said, mine thrives in direct sun, all day, on the Pool Terrace. It is not affected by low humidity, lack of water or sporadic fertilization.

They are equally at ease inside and out. Heck, they’ll even tolerate being root bound. But, the line must be drawn some- where! While the Sansevieria cylindrica can survive some 30 degree (F) nights, it can’t handle a hard freeze. Normally speaking, they would like to be in at least 50 degree (F) climes. Now, that all having been said, they would really appreciate it if you planted them in somewhat sandy, well-draining, soil as their roots like – not one little bit sitting in water, as that tends to make them rot.

So what, exactly, are those water needs? During its growth period, water only moderately with enough to moisten the pot- ting mixture thoroughly – but allow the top couple of centimeters of potting mixture to dry out before watering again. During your Sansevieria cylindrica’s rest season, allow at least half of the potting mixture to dry out before giving it a drink. Food? Apply a liquid fertilizer about once a month to all plants during their active growth period.

When planting in the ground, space each specimen so as to allow clumps to form and develop properly. If they are  planted too closely together, there will not be enough room for their roots to stretch and expand, rendering them incapable of reaching their full height and bloom potential.

As to any additional care you may wish to extend to your African Spear, you might (every so often) wipe its leaves with a damp cloth to keep them dust-free. These are tipped with narrow awl-shaped points which one should take care to not dam- age as a leaf with a broken tip will stop growing.

Seeking others? While these plants can be divided when several spears are present, it’s really simpler and better for all concerned the plant and you if you just bought a new one! I would, however, encourage repotting annually or every other year in the spring.