By Kirby Vickery from the November 2016 Edition

In modern society, we have two magic numbers out there that have a constant effect on our very being in 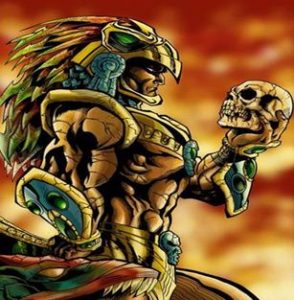 The magic number for the Aztecs was 52. They believed in the five worlds of creation. Each world lasted 52 years. The Aztecs knew that this world we live in would also last only 52 years.

But, if the god Huitzilopochtli is kept really happy through worship and sacrifices, then he/she would extend it for another 52 years.

Huitzilopochtli was one of the major gods in the Aztec pantheon of gods. Principally, he was the god of war, closely akin to Mars, the Roman god of war and the guardian of agriculture. The Greek goddess of War, Athena, was also the goddess of wisdom, courage, inspiration, civilization, law and justice, mathematics, strength, war strategy, the arts, crafts, and skill in ancient Greek religion and mythology. This was just a little too broad-based for the Aztecs.

Where Mars was born from Juno, a Roman god, Huitzilopochtli was born to a widow woman called Coatlicue. She was said to be very pious and the mother of the Centzonuitznaua tribe.

Coatlicue, also known as Teteoinnan (also transcribed Teteo Inan the “The Mother of Gods”), is the Aztec 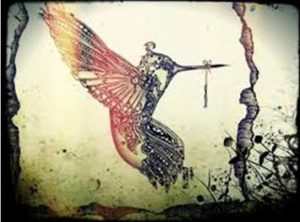 goddess who gave birth to the moon and stars. She is also known as Toci, (“Our Grandmother”), and Cihuacoatl, (“The Lady of the serpent”), the patron of women who die in childbirth. The word “Coatlicue” is Nahuatl for “the one with the skirt of serpents”. She is referred to by the epithets as “Mother Goddess of the Earth who gives birth to all celestial things”, “Goddess of Fire and Fertility”, “Goddess of Life, Death and Rebirth” and “Mother of the Southern Stars.

When Coatlicue was on her way to offer prayers to all the Aztec gods, she was surprised by having a ball of really bright-colored feathers fall on her. She was impressed by their hue and color and placed them in her bosom so she could offer them up to the sungod. What she found out later was that she had become pregnant. (Some versions of the story tell that she was a virgin yet she had several other children who were already grown.) When her sons found out they intended to humiliate her and started to abuse her.

She was afraid and full of anxiety when the spirit of her unborn child called out to her and reassured her that everything was okay. It was at this time that her sons decided to murder her to save face of their race. They dressed up in their war costumes, armed themselves with darts and lances, then trooped out to find and kill her.

One of them, Quanitlicac, turned back and spoke to his unborn brother, Huitzilopochtli, he cried, “O brother, hearken attentively to what I have to say to you. I am fully informed of what is about to happen.”

“Mark well where they are,” replied the infant god. “To what place have they advanced?”

“To Tzompantitlan,” responded Cuauitlicac. Then he asked, “Where may they be now?” “At Coaxalco,” was the reply.

Once more Huitzilopochtli asked to what point his enemies had advanced. “They are now at Petlac,” Quauitlicac replied. After a little while, Quauitlicac informed Huitzilopochtli that the Centzonuitznaua were at hand under the leadership of Coyolxauhqui (his sister leading the group). At the moment of the enemy’s arrival Huitzilopochtli was born, holding a shield and spear of a blue color. He was painted, on his head was a helmet, and his left leg was covered with feathers. He shattered Coyolxauhqui with a bolt of lightning, and then gave chase to the rest of them, whom he pursued four times round the mountain. They did not attempt to defend themselves, but fled incontinently. Many perished in the waters of the adjoining lake, to which they had rushed in their despair. All were slain save a few who escaped to a place called Uitzlampa, where they surrendered to Huitzilopochtli and gave up their arms.

The name Huitzilopochtli signifies “Humming-bird to the left from the circumstance that the god wore the feathers of the hummingbird, or colibrí, on his left leg hence the hummingbird totem. The explanation of Huitzilopochtli’s origin is a little deeper than this, however. Among the American tribes, especially those of the northern continent, the serpent is regarded with the deepest veneration as the symbol of wisdom and magic. From these sources comes success in war. The serpent also typifies the lightning, the symbol of the divine spear, the apotheosis of warlike might. Fragments of serpents are regarded as powerful warphysic among many tribes. Atotarho, a mythical wizardking of the Iroquois, was clothed with living serpents as with a robe, and his myth throws light on one of the names of Huitzilopochtli’s mother, Coatlantona (Robe of Serpents). Huitzilopochtli’s image was surrounded by serpents, and rested on serpent shaped supporters. His scepter was a single snake and his great drum was of serpent skin.

In American mythology, the serpent is closely associated with the bird. Thus, the name of the god Quetzalcoatl is translatable as “Feathered Serpent,” and many similar cases where the conception of bird and serpent has been unified could be adduced. Huitzilopochtli is undoubtedly one of these. We may regard him as a God, the primary conception of whom arose from the idea of the serpent, the symbol of warlike wisdom and might, the symbol of the warrior’s dart or spear, and the hummingbird, the harbinger of summer, type of the season when the snake or lightning god has power over the crops.

Strangely enough, when the absolute supremacy of Tezcatlipoca is remembered, the high-priest of Huitzilopochtli, the Mexicatl Teohuatzin, was considered to be the religious head of the Mexican priesthood. The priests of Huitzilopochtli held office by right of descent and their primate exacted absolute obedience from the priesthoods of all the other deities, being regarded as next to the monarch himself in power and dominion.

At the Movies – THE BIG SHORT