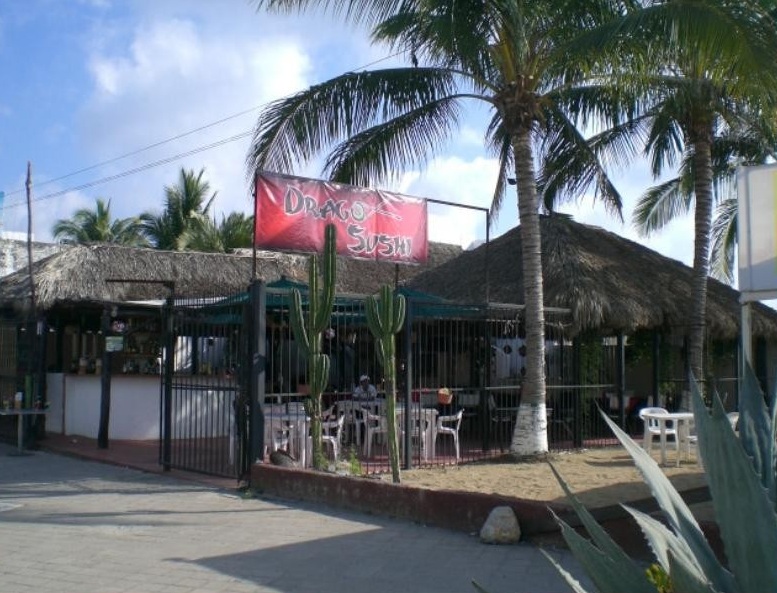 Drago Sushi joins the select few sushi places in Manzanillo. You can find them by driving towards Las Brisas on Miguel de la Madrid Boulevard. Pass Soriana and when you see the Marbella Hotel sign on the right start to slow down. Again on the right you will pass the Kiosko, see a Dan Rafa Taco stand and then Drago Sushi. It is across the street from the La Sonrisa. “Drago” means “Dragon” so we’re talking Dragon Sushi!

Having been a martial arts fan for a long time I trended towards oriental, and especially Japanese, foods everywhere I could find them from an early age. Japanese food is known for taste and flavors based on the freshness of the food itself, not fancy overwhelming sauces. Not that I don’t enjoy fancy, overwhelming sauces too! That said, freshness can make good Japanese food and sushi a bit more expensive than a night at a taco stand. Los Angeles, CA was a blissful relief in terms of quantity, quality and cost. There was a sushi restaurant every 100 yards it seemed. That was a sushi nirvana!

Drago Sushi has a menu that is large and varied. The tempura had a 30 minute waiting period, so I opted not to try that as it is a usual favorite for comparisons. We did try an order of Chicken Yakitoris, an order of Shrimp Temakis, an order of Negris (5 piece sushi mix, chef’s choice) and a House Specialty The Drago Rolled Cone. We were too full to try a dessert, of which there were three very tempting selections that all looked excellent. My favorite was the Chicken Printed on one side in Espanõl and the other in English it has a huge variety of things to choose.

They offer salads, sashimi, spring rolls, traditional sushi, house specialties and desserts to name a few. They also have a full bar and nice selection of liqueurs including Baileys, Kahlua, Sambuca and Amaretto Yakitories (skewered pieces of very tender chicken and vegetables) served on a bed of lettuce with a nice teriyaki type sauce. The Negris was good and included a roe selection and a salmon which was very good and fresh. We also had iced tea and a cerveza.

Bruno took very good care of us and brought a large bottle of sanitizing gel to the table before serving us. The total for the evening came to $310 pesos for some large portions and excellent tastes. If you aren’t a sushi fan I would suggest the tepanyaki or tempura dishes, just allow some preparation time and carry on pleasant conversation in their comfortable restaurant.